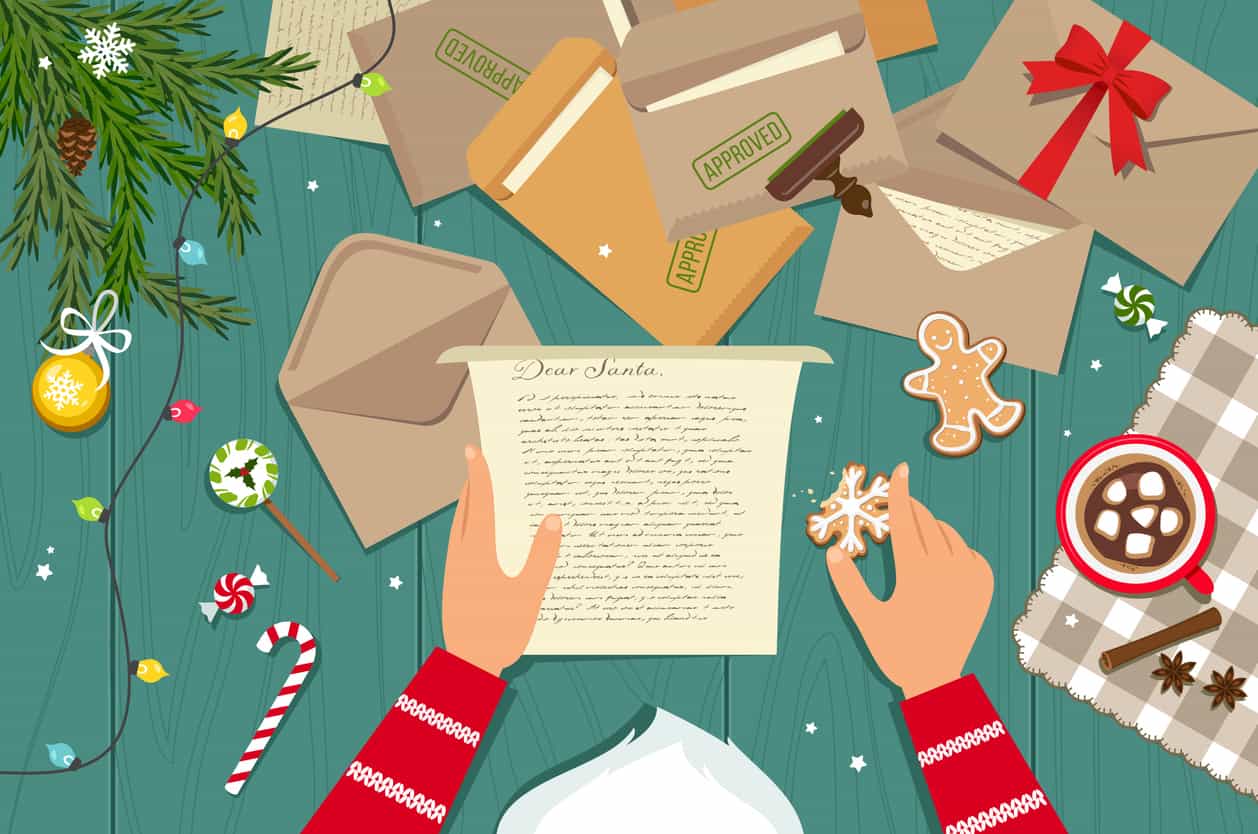 Special thanks to Alex Palmer for this great post! Read more of his work here.

Every year, as temperatures begin to cool, letters to Santa Claus start rolling in to post offices around the country, filled with wish lists and questions from children. But since Santa himself tends to be too busy to handle all his mail, the duty falls to a wide-ranging group of volunteers, postal workers, and folks filled with the holiday spirit. Mental Floss spoke to a few of these dedicated individuals to find out some of the secrets of answering Santa’s correspondence.

1. SANTA HAS MANY ADDRESSES.

There are numerous Santa headquarters in the United States alone. If a kid drops a letter addressed to “Santa Claus” in the mail, it will likely end up at their local post office—and at hundreds of post offices around the country, the postal employees answer Santa’s mail themselves.

“It’s the kindness of our own employees,” Darleen Reid-DeMeo, senior public relations representative for the United States Postal Service (USPS), tells Mental Floss. But the letter may also be forwarded to the nearest Operation Santa Claus site, which is run by the Post Office and allows members of the public to adopt and answer as many letters as they like.

Any post office can sign up to be an Operation Santa Claus branch, if the local postmaster and employees agree to follow the USPS rules for the program and volunteer their time to run it. Currently there are 15 official branches throughout the U.S. The program is voluntary for the local employees and postmaster, so any post office can decide to do it one year and not the next.

2. SANTA HAS DIFFERENT WAYS OF ANSWERING.

If a letter is addressed specifically to “Santa Claus, 4141 Postmark Dr, Anchorage, Alaska,” and includes a self-addressed, stamped envelope, senders can get a reply with a “North Pole” postmark. “That’s for people who want to respond on behalf of Santa—for parents who want their child to get a note from Santa himself,” Reid-DeMeo says. If a kid writes a letter to Santa and includes the city “Santa Claus, IN” on the envelope, it will go to the Santa Claus Museum & Village in that city, where the letters are responded to by volunteers with a note postmarked by the city of Santa Claus.

While it’s difficult to get an exact number of the letters sent, Gail Branham, customer relations coordinator and Chief Elf at the USPS, who oversees Operation Santa Claus, estimates that they receive about 50,000 letters a year at the New York branch alone. Emily Weisner Thompson, director of the Santa Claus Museum in Indiana and author of the books Letters to Santa Claus and But What if There’s No Chimney?, estimates they get about 20,000 letters annually.

With such a heavy volume, those working to answer Santa’s mail need plenty of help. On any given day during the season at the Santa Claus Museum, there are seven to 10 volunteers (a.k.a. “elves”) opening and responding to letters throughout the day. “The few who are here most days of the week are really efficient and they can pump them out,” Thompson tells Mental Floss. Every night in December, the museum has at least one group—a small business, high school students, elementary school teachers, and so on—who come in to answer a stack of letters over several hours. All told, Thompson estimates they have about 250 volunteers throughout the month.

At the USPS, it’s a similarly diverse group of answerers lending a hand. “For some companies, it’s part of their holiday protocol,” Branham says. “They get letters for their organization and deliver it among the coworkers. It’s a group effort for a lot of people.” She describes a group of “big, burly guys,” who came in to the James A. Farley Post Office (home base for New York City’s Operation Santa Claus) last year but were not part of any particular organization. “They said, we just go to games, go to the bar together, and now we answer Santa letters,” Branham says. “They sat, read the letters, went shopping, bought boxes in the lobby, paid for their postage—they were here all day.”

Answering Santa letters gives one a good sense of the most popular toys and gifts of the year. Thompson points to the baby monkey Fingerlings, Shopkins toy figures of grocery store items, superhero action figures, and Hoverboards as a few of the popular items in letters to the Santa Claus Museum this year.

From what Branham’s seen, “Everybody wants an i-something: an iPhone, an iPad, an iWatch.” But no matter what the requests, she says, “There’s a letter that will appeal to [everyone]—some people have deep pockets, some don’t. But they take their time and look for something they can fulfill that’s within their means. They want to participate and help someone.”

6. SOME LETTERS DON’T ASK FOR ANYTHING.

“We get simple requests, and sometimes letters that don’t even have a request, like, ‘Santa, I love you, I think you’re great,’” Branham says.

Thompson describes getting “some very introspective letters,” such as a recent one where the child wrote, “Dear Santa, I’m really struggling with turning 10 this year.” Another one read “I’ve been good, please come to my house, I’d really like my dad to be smarter.”

“There’s certainly a perception that the world is increasingly materialistic and in some ways that’s true, but there is a lot of mail that comes through that is kids thinking of others,” Thompson adds, giving examples of kids asking on behalf of their siblings or parents or commenting on poverty and wider difficulties.

In other cases, kids will ask Santa about his life and Mrs. Claus, or draw images of him and his world. In some cases, the writers will even include a gift from them to the holiday saint.

“It’s amazing to see what makes it through the mail sometimes,” Thompson says. “They’ll bedazzle the envelope sometimes, or you open one up and 20 pounds of glitter falls out. It’s nice when they take the time to decorate it.”

7. IT INVOLVES A LOT OF SECURITY MEASURES.

With so many gifts and so much private information involved, Operation Santa Claus has put a number of strict rules in place. In 2006, the organization required that every address be redacted to ensure none of the kids’ locations are seen by the members of the public. Instead, each letter is assigned an anonymous number. They also began requiring donors to present a photo ID when picking up a letter. When donors drop packages off, the postal employees match the anonymous number with the address where the gifts are supposed to be delivered. To avoid duplicated gifts and track which letters are adopted, the USPS also has created a shared database where each letter is assigned a number and tracked.

“Our No. 1 goal before anything is to protect the letter-writers’ personal information,” Reid-DeMeo says.

Operation Santa Claus has taken its approach a step further this year, with the launch of DeliverCheer.com, where those interested in answering Santa’s mail can go online and adopt a letter from a New York City kid.

An outside contractor opens, redacts any personally identifiable information, and uploads the letters. The contractor has been “deputized” by the postal service to open the letters, which then go to the postal “elves” actually employed by the USPS, who “check it twice” to be sure all personal info has been removed before pushing a button and going digital. If the project is successful in New York, the USPS hopes to roll out DeliverCheer.com nationwide next year, removing much of the manual work and expanding the Operation Santa program.

“For 105 years, we’ve been doing it manually—people are physically opening and copying the letters, redacting them and inputting information into a database and with this new pilot, we’ve removed the manual handling of the letters so it’s all done digitally,” Reid-DeMeo says. “Anybody can go on there and read letters, but if you decide to adopt, you click the button.”

9. THEY HAVE A LEGACY TO PROTECT.

“To think that you’re participating in something that’s 105 years old is a huge responsibility,” Branham says. “People expect to come here every year—this is their tradition, they bring their kids, when their kids become adults they want to bring their kids and see Santa letters.”

It’s also an unstated requirement for any person answering Santa’s mail to “maintain the magic,” as Thompson describes it, speaking of Santa as a real, if hard-to-pin-down, figure.

“When a reporter asks, ‘How do you feel about answering these letters?’ the volunteers are good about phrasing it as, ‘It’s great to be able to help Santa out—he’s so busy.’ They’re all Santa believers too.”